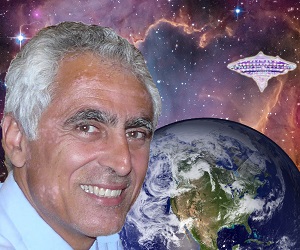 The workshop will focus on the exo-politics behind the Nazi infiltration of the USA military industrial complex in the 1950s and 1960s.  This will include the role of John F Kennedy, who heroically attempted to regain Presidential control over classified UFO information.  Kennedy’s knowledge of the Nazi secret space program will be presented to substantiate a shocking connection to his assassination.

The recent emergence of three whistle-blowers claiming to have served in 20 year tours of duty with different secret space programs will be assessed.

The recent testimonies of Corey Goode and William Tompkins will be discussed in terms of the officially sanctioned efforts by US military services to promote full disclosure.  Goode’s and Tompkins’ claims of secret negotiations deciding the disclosure of antigravity technologies, advanced health and life extension technologies, the existence of subterranean civilizations, and extra-terrestrials will be examined.

Dr Michael Salla is the author of the Amazon.com best seller, Insiders Reveal Secret Space Programs and Extra-terrestrial Alliances (September 2015).  He has held academic positions at the Australian National University (ANU), American University (Washington DC), Queensland University and George Washington University.  He has been interviewed for the Ancient Aliens, and is a regular guest on Coast to Coast AM Radio (USA).

Michael will have his books, Kennedy’s Last Stand, and Insiders Reveal Secret Space Programs and Extra-terrestrial Alliances, on sale at the workshop for $25 and $30 respectively.

The introductory lecture is being held on the 6 August 2016 at the same venue. 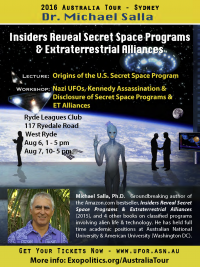 Payments can be made at the door or in advance using