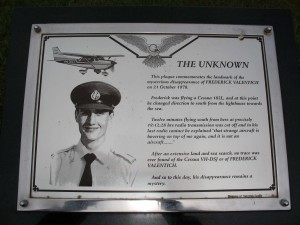 The Frederick Valentich’s memorial plaque, shown above, is located adjacent to the lighthouse at Cape Otway, Victoria, Australia.  This plaque was erected by the Valentich family.

Frederick’s father, Guido Valentich (deceased) said, ‘He hoped his son had been taken by a UFO, and had not crashed,’ and that, ‘The fact that they have found no trace of him presents a possibility that UFOs could have been there.’