You may be familiar with Alec Newald’s experiences and his book, Co-Evolution. 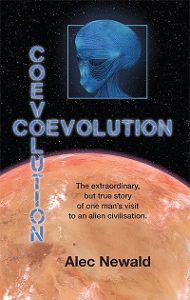 While travelling up a foggy mountain pass, from Rotorua to Auckland (NZ) in February 1989, Alec was taken by extra-terrestrials to an advanced civilisation.  He stayed there for ten days.

As if that was not strange enough, once back home he started receiving visits from officials wanting to know more about his experiences and especially about the capabilities of this extra-terrestrial race.

He found himself immersed into a dangerous and secret world.  A world full of high technology and secret agendas carried out by personnel, few have ever come into contact with, yet alone survived.

In Alec’s own words:

I have an extraordinary experience to relate to those with ears to hear, a life-changing experience in every sense of the word, changing.  Who would think having a better understanding of who you are and where you reside would make you a target to be hushed and cross-examined by those that consider they own and control you?

I can assure you it was the furtherest thing from my mind before the year 1989.  In mid February of that year, the year of my forty-first birthday, I received a wake up call, or you could say a call to duty.  It was meant for no one else but me.  Hence it was private, covert, and beautifully executed.  To the rest of the world I would have appeared to have died in an automobile accident, on a twisty mountain road with no witnesses and no one else at fault.  An open and shut case, no questions to be answered.

Well at least that was the plan, or so I found out some time later.  As it turned out, that plan was only partially implemented because, against the advice of my learned Elder bothers and sisters.  I decided to opt out of the finality of death on earth, for that moment at least, and continue on as before.  Only the problem was, I could never actually continue on as before, for a multitude of reasons.

Number one of that multitude was, you can’t unknow something once it takes up residence in your head.  This leads quickly into the next reason, which is, nothing that was in my head before the February 1989 experience was actually accurate in regards to who I was.  That left me with the possibility the same might apply to you, or dare I say all of us!  It stretched even further.  Nothing I had ever been told about Earth’s history, or it’s current situation in the bigger scheme of things was accurate, not by a long shot.

I, or we, have been feed bullshit since the day we were born and so had many generations before us throughout history.  Yes, a very hard pill to swallow.  Try absorbing that and continue to live your life as if nothing has changed.

Perhaps an even bigger surprise was, with the exception of a few, the more I tried to share this information the harder my life became.  I was ostracised by people you might have expected support from.  In-fact, even before I tried to share any of the things, I’d learnt my life started to become more than difficult.  It became impossible to continue on as before.

As I write this almost 30 years later nothing has really changed for the better.  I can’t travel freely and in many cases I’m a second class citizen, in my country of birth.

Yes, I have a story to tell for those with ears to hear.

Please note that Alec will be presenting via Skype from his home in Auckland, New Zealand.

There is free parking beneath the club. The West Ryde Railway Station is near the club.

Please feel welcome to join us for a drink after the presentation, in the downstairs lounge, for more lively and intriguing discussions.