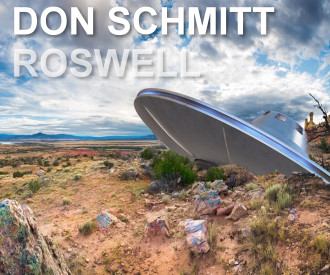 On the evening of July 2, 1947, several witnesses in and near Roswell, New Mexico, observed a disc-shaped object moving swiftly in a northwesterly direction through the sky. The following morning Mac Brazel, the foreman of a ranch located near Corona, New Mexico, rode out on horseback to move sheep from one field to another. Accompanying him was a young neighbor boy, Timothy Proctor. As they rode, they came upon strange debris of chunks of metallic material of varying size. The debris was scattered over a large area and looked like some type of aircraft had exploded.

Brazel picked up some of the pieces. He had never seen anything like them. They were extremely light and very tough.

By the time events had run their course, the world would be led to believe that Brazel had found the remains of a weather balloon. For three decades, only those directly involved in the incident would know this was a lie.

The cover-up did not begin to unravel until the mid-1970s, when investigator Stanton T. Friedman talked to two separate individuals about what they had observed. One, an Albuquerque radio station employee, had witnessed the muzzling of a reporter and the shutting down of an in-progress teletype news story about the incident. The other, an Army Air Force intelligence officer, had led the initial recovery operation. The officer, retired Major Jesse Marcel, stated flatly that the material was of unearthly origin.

As more and more intriguing evidence has come to light, what has emerged is a complex, bizarre and almost unbelievable story.

Donald R. Schmitt is the world’s leading Roswell researcher, an internationally acclaimed investigative journalist, best selling author, and former co-director of the J. Allen Hynek Center for UFO Studies of Chicago.
Meet Don and hear about his research on Roswell, arguably the most important UFO event of our time. With hundreds of witness testimonies and compelling evidence, this may be the biggest story of the millennium.

DON SCHMITT is presenting in Sydney (two events) and Melbourne:

Getting There: Limited parking is available under the Epping Club on a first in first served basis.

Please tell the attendant you are there for the UFO Research Event. (If attendant is unavailable press the button to talk to the concierge).
There is also parking around the general area. Epping Train station is a short walk via the footbridge and through The Epping Walk Arcade.

Looking forward to seeing you at these special presentations
The Committee – Maree, Jaimie, Aspasia and Paul.