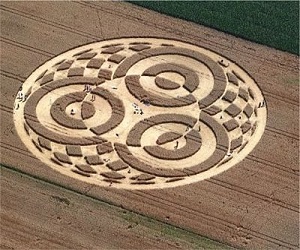 1  to 2 pm – Welcome by the President, Mariana Flynn, then the following:

Horace has worked at Caltech, Cambridge and CSIRO Australia.  He carried out the first high-resolution X-ray crystal structures of DNA and helped develop several gene-therapy and PCR diagnostic medical procedures.

Since 1998, Horace has studied what he terms, ‘UFO problem,’ as well as, ‘Crop pictures.’  He also had managed a small team carrying out forensic analyses of alleged ‘alien’ tissue samples, for example, Peter Khoury’s hair sample.

In 2002, after one of Horace’s DNA theorems appeared in crop circles at Crooked Soley, he determined, scientifically, that the crop pictures could not have been made by people using rope and boards, and has been studying crop circles since this time.

The first half of this talk will recount the message from an important crop picture seen in June 2015,  that he translated as, ‘Timeo ET ferentes!’ or, ‘Beware of the ET Trojan Horse!’ represented in binary ASCII code.

He will demonstrate a novel multiplex binary code, which was given by telepathy to a reliable military witness known as CJ.  This occurred after he and his family saw a large UFO close to the ground (along with many other witnesses) near Atlanta on the 29 June 2015.  He later received a series of coded messages from a friendly grey alien race called the Emerthers.

The Club is near to Burwood Station.

There is $4 parking at the Wilson car park directly behind the club.