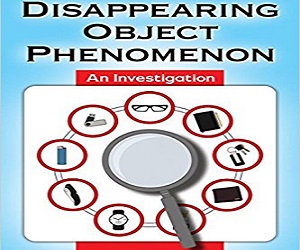 Dr Tony Jinks will speak about, what is termed, The Disappearing Object Phenomenon (DOP).

Tony is a Senior Lecturer at the School of Social Science and Psychology, Western Sydney University.  Tony is also the President, Australian Institute of Parapsychological Research.

He has a background in Neuroscience and has published scientific articles in the field of neuroscience, perception and parapsychology (regarding the latter, there is a focus on paranormal belief and experience).  He has published two books on paranormal issues: An introduction to the psychology of paranormal belief and experience (McFarland 2011) and The disappearing object phenomenon: an investigation (McFarland 2016).

A surprisingly large number of people claim to have lost a personal item in, ‘unusual circumstances’.  The typical example involves a household object or possession, such as an apple, spoon, purse or key.  These articles are placed in a location and later found to be missing, seemingly for no apparent reason.

There are internet sites dedicated to recounting tales of anomalous object disappearances, as well as mysterious appearances, reappearances and replacements.  These sites also debate the origins of the phenomenon.

No serious, systematic study of DOP has been undertaken, until now.  This presentation will examine various characteristic patterns found in a collection of over 400 case studies, and discuss how these patterns might assist in understanding the origins of the DOP experience.  Recent findings from two research studies (conducted in 2015/2016) examining putative psychological traits underlying DOP.

During the first half of the meeting, we will show the new Dr Steven Greer documentary, Unacknowledged.  This documentary focuses on the historic files of the Disclosure Project and how UFO secrecy has been ruthlessly enforced.  The best evidence for extraterrestrial contact, dating back decades, is presented, with direct top-secret witness testimony, documents and UFO videos.  The research and meetings convened by Dr Steven Greer expose the illegal and covert operations, at the core of UFO secrecy.

Meeting entry is $15 for members and $20 for non-members.
There is free parking beneath the club.  The West Ryde Railway Station is near the club.