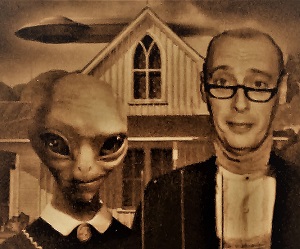 Our June speaker is Jaimie Leonarder.

Jaimie is a committee member and UFO researcher.  He will take us on a journey behind the scenes of the many radio and television UFO related productions he has worked on.  In the early 1990’s he travelled to the Nullarbor for his Radio National production, titled, To Catch a Flying Star.  He investigated the Knowles UFO encounter and has also collected an extensive history of Australian UFO sighting reports.

In 1994 he was approached by Mystery Clock and Alex Proyas to become head researcher on a television pilot called, Conspiracy.  In this production he organised interviews with Bob Lazar, John Lear and Jim Keith.

Jaimie has consulted on other Australian UFO related documentaries including, The Extraordinary, Westall 66 and Australien Skies.

The new millennium brought a role as co-host on the SBS TV, The Movie Show, where he managed to subversively engineer a few stories on the UFO topic.

We will go behind the camera for an array of stories on the people and places involved in these productions.

Jaimie’s wife, Aspasia, has tracked down lost archival footage and sound bites from their extensive archives, which Jaimie will be presenting.

This will be not only be an in-depth insight into the media involvement in the UFO topic, but also a light hearted look into the personal side behind the scenes.

As most of you know, Jaimie Leonarder is an excellent presenter and this will be an entertaining and lively presentation.

The Club is near to Burwood Railway Station.

There is $5 parking at the Wilson car park directly behind the club.