James Edward McDonald (7 May 1920 to 13 June 1971) was a Senior Physicist of Atmospheric Physics and a Professor of Meteorology at the University of Arizona (USA).  He was also a pre-eminent American UFO researcher during the 1960s and continued his research up to his tragic death, due to suicide, in 1971.

McDonald was cautious when discussing the possible origins of UFOs, however he considered the Extra-terrestrial Hypothesis (ETH) as one of the likely candidates, stating that, ‘The extra-terrestrial hypothesis is, at present to my mind, the least unlikely.’ [1]   He also promoted the serious study of UFOs by academia, government and the scientific community. 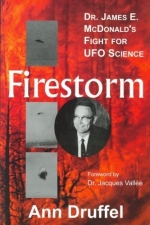 McDonald’s, correspondence, interviews including audio, and printed materials, predominately relating to the period 1958 to 1971 are archived in the Special Collections at the University of Arizona Libraries (USA).  He regarded the radar visual (RV) UFO sighting reports as being one of his most important collections.  In the archive, there are documents and photographs that were collected by McDonald during his Australian visit.

The original audio recordings (magnetic tapes) for the period 1967 to 1968 have been digitised and copied to CD-R media and are held by the University of Arizona.  The duplication of this material, including the audio recordings may be requested, for a fee, from the Special Collections at the University of Arizona.   Copyright restrictions apply to the intended use of the documents and audio and permission to publish (including payment of a fee) must be obtained from the University before any publication. 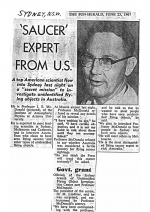 This significant audio collection includes the tape recorded audio interviews made during his visit to Australia (including Tasmania) in June/July 1967.  McDonald was hosted by the Victorian Flying Saucer Research Society (VFSRS) located in Melbourne, Australia.  During the visit, members of that Society, such as Colin Norris, Paul Norman and Jeff Rumpf were present during some of the interviews.  In the following year, 1968, VFSRS was renamed the Victorian UFO Research Society (VUFORS).

A copy of these CDs’ files was obtained from the Special Collections at the University of Arizona Library, for research use. Permission to publish the audio was not sought, due to cost.  Therefore, the audio files cannot be made available for download, or distribution to others.

The summaries were transcribed from the audio, that was originally recorded by McDonald using his hand-held magnetic tape, audio recorder.  He used this recorder during most interviews, and for some, he recorded the telephone conversations with the witnesses.  Listening to the original audio gives a unique insight to the reports, that text alone, is not able to convey.

A significant number of relatively famous Australian witnesses to UFO sightings were interviewed during his visit, including Reverend William Gill, an Anglican priest who observed craft-like UFOs, with what appeared to be humanoid figures, on two consecutive evenings during 26 and 27 June, 1959, at Boianai, Papua New Guinea.  The interview with Barry Jones (Australian Federal Government Minister, between 1983 and 1990), on his radio show, recorded on the 5 July 1967 (Identification Code/CD Number: T03S2/CD05) in Melbourne, reveals that McDonald had been in Australia, investigating UFO reports, from the 24 June to the 10 July 1967. A television interview of McDonald was broadcasted on the 4 July 1967 while he was in Melbourne, Australia.

The audio recordings demonstrate how dedicated McDonald had been to what he termed, ‘The UFO problem,’ and he regarded, ‘UFOs as the greatest scientific problem of our time.’  McDonald also states in the audio that he is convinced that, at least, over the last 20 years, the Earth has been, ‘Visited and reconnaissance’s by craft, that are not products of our technology.’  McDonald further stated that the evidence for UFOs is, ‘Nothing short of astounding.’

The demeanour of McDonald’s commentary and questioning of witnesses, demonstrates that he was methodical, intelligent and diligent.

Listen to James E McDonald’s radio interview, recorded in early July 1967, at the end of his Australian investigations.  He speaks about the Australian UFO sighting reports, criticism of  the Project Blue Book (USA) conclusions, his statement to the United Nations – Outer Space Affairs Group, and his thoughts regarding, what he termed, ‘The UFO problem.’  This audio is courtesy of Wendy Connors. [3]

The audio recordings (some USA reports included), are tabulated below and were summarised by Keith Basterfield and Anthony Clarke.  The summaries have been published as a searchable pdf document (100 pages/1.2 MB).  This project was completed in November 2016 and the summaries are posted for UFO research and historical purposes.  It is likely that some of these reports have not been previously published.  Some of the audio files provided by the University of Arizona had misspelt witness names and locations in the file names, these have been corrected, to the best of our knowledge, in the summaries.

We would appreciate that if any of these summaries are published that the source is quoted in the in-text citations and/or reference list.